The Skyraider was originally designed in the 1940s by Ed Heinemann of the Douglas Aircraft Company. At the time of the first prototype's flight on 18 March 1945, it was the largest production single-seater aircraft. The low-wing monoplane design started with a Wright R-3350 radial engine, later upgraded multiple times. Its distinctive feature was the presence of seven hardpoints on each wing, enabling it to carry a tremendous amount of ordnance for its size. The Skyraider could carry as much bomb load as a WWII B-17 Flying Fortress typically carried. It was also capable of carrying nuclear weapons.

Although the Skyraider entered production too late for Tactive service in World War II, it turned out to be of great value in both the Korean and Vietnam Wars, as its weapon load and 10-hour flying time far surpassed the jets that were available at the time.

On 9 October 1966, four VA-176 A-1H Skyraiders from the USS Intrepid were vectored deep into North Vietnam to cover a rescue helicopter trying to reach a downed F-4 Phantom II crew. After pushing through a brief flak barrage, the Spad lead flight pushed further inland where they were set up by four MIG-17s. In the ensuing maneuvers which twisted down to tree top level, the opponents separated and two of the jets were heavily damaged at the hands of the Spad flight leader and his wingman. Seconds later, tail-end element Lt.(jg) Tom Patton in Spad "09" (BuNo 13543) reached the flight and dropped down on the last MIG, skimming just above the jungle. The enemy pilot attempted a climbing turn followed with a reverse turn which negated all of the MIG's speed. Patton skillfully split-Sed into point blank range at six o'clock and closed to within 100 feet of the silver intruder. After gutting his target with the last of his 20mm ammo, Patton even tried for a coup de grace with four of his Zuni rockets, but missed. The riddles MIG rolled over and plunged out of sight through a low hanging cloud. After a quick turn beneath the thin cloud bank, the victorious Navy aviator caught a glimpse of the MIG driver drifting into the jungle beneath his parachute. 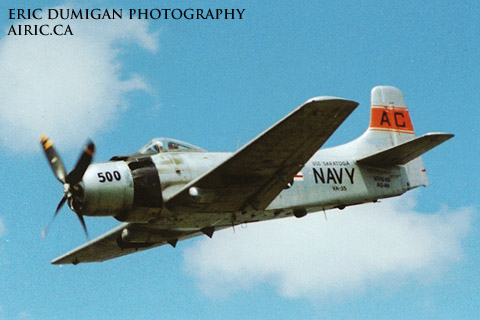 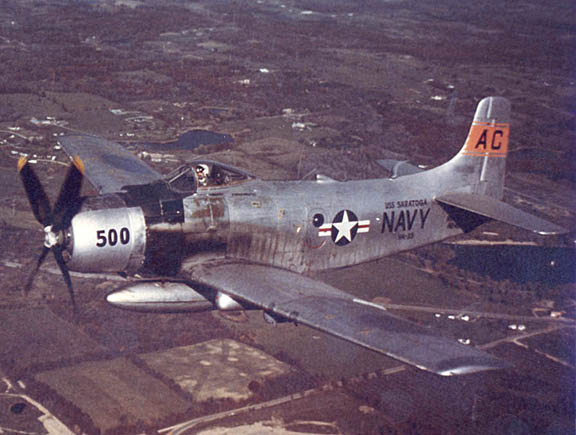 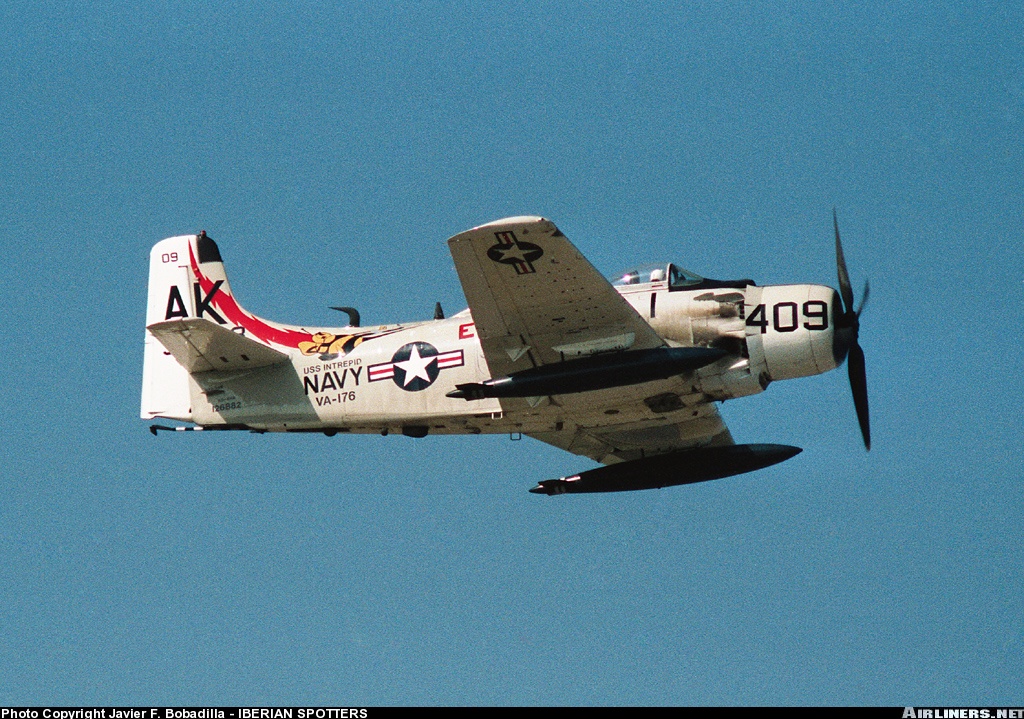 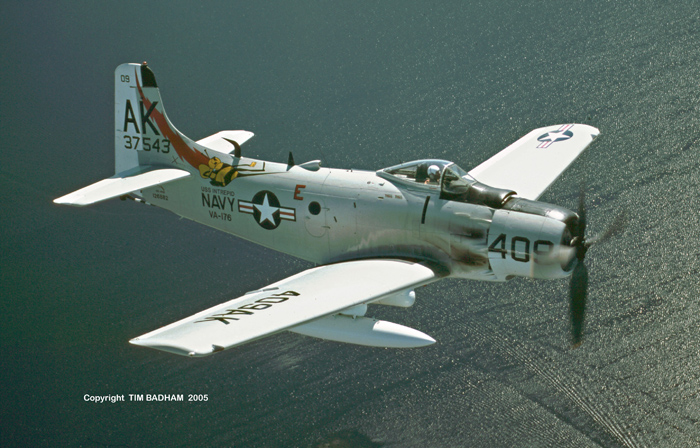 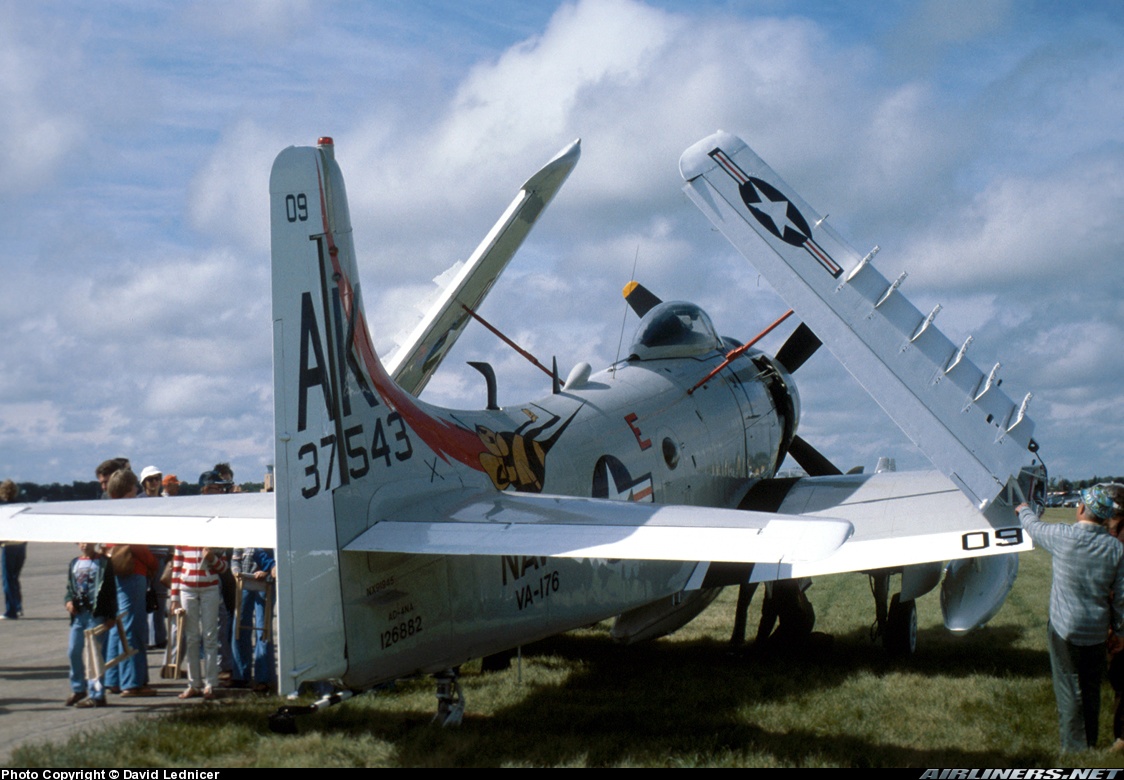 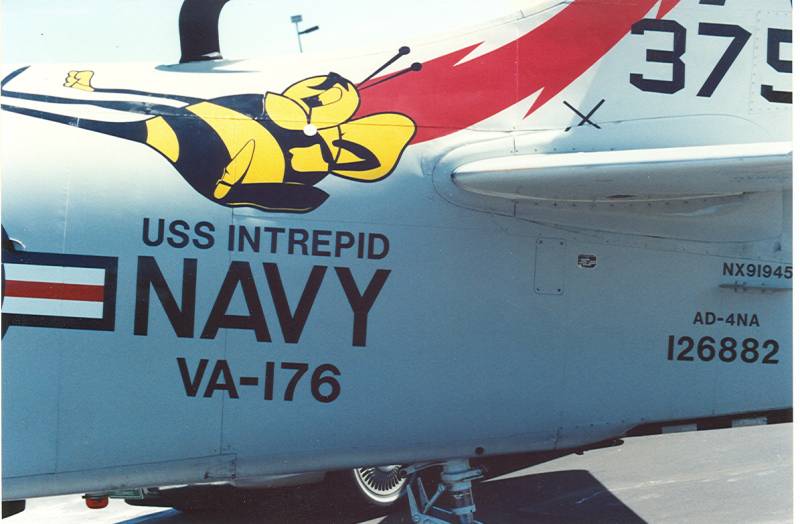 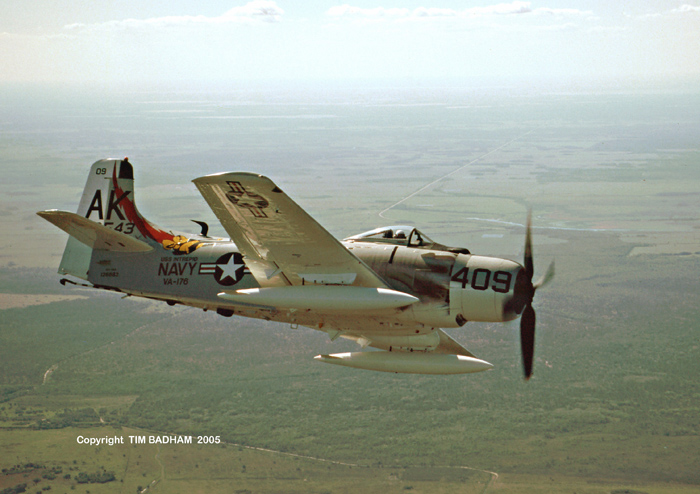 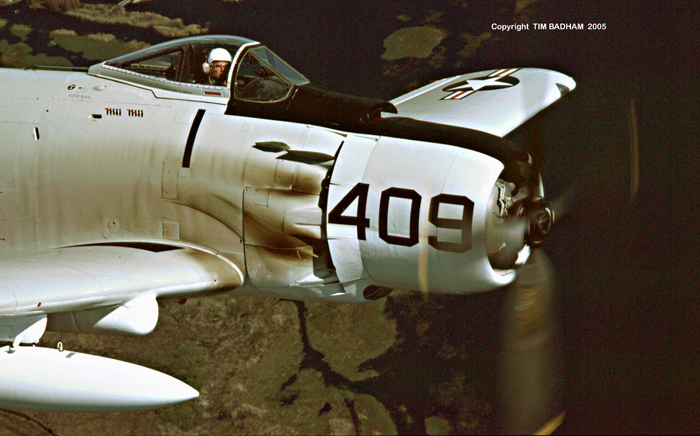 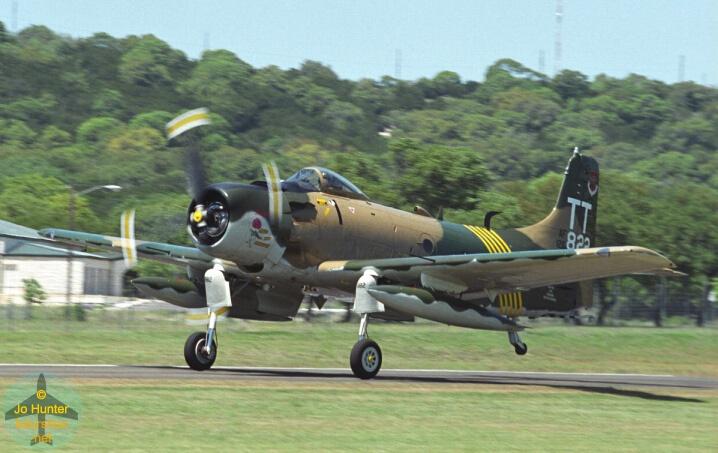 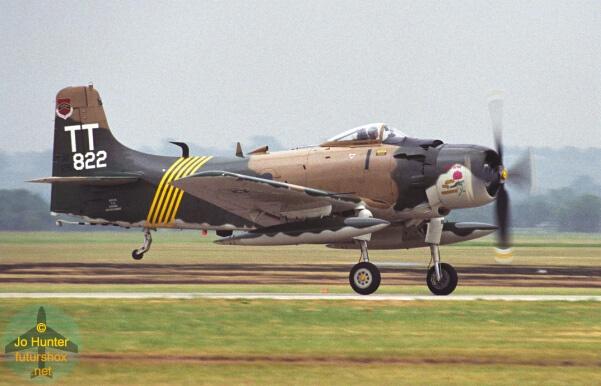 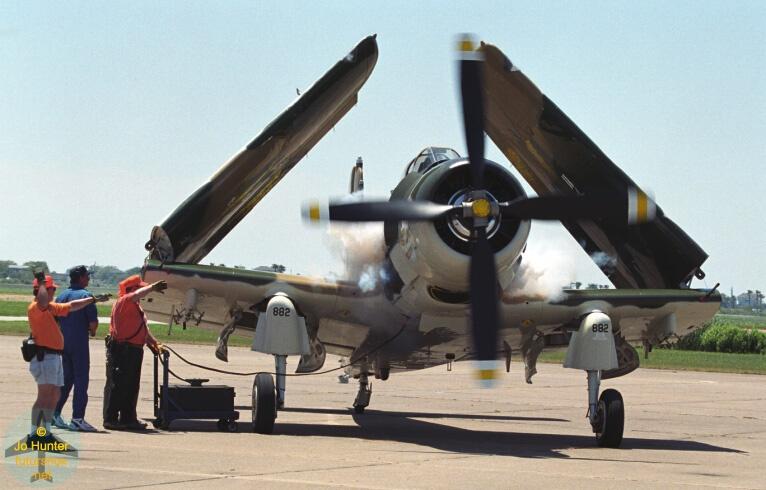 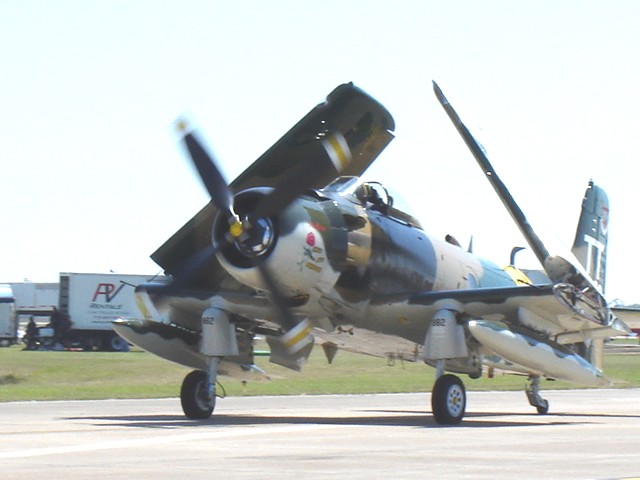 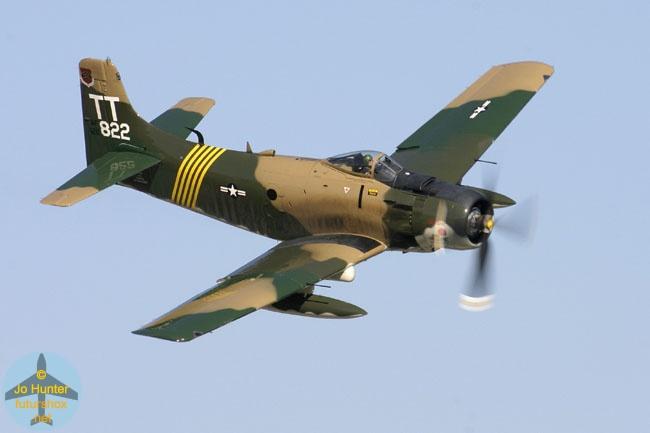 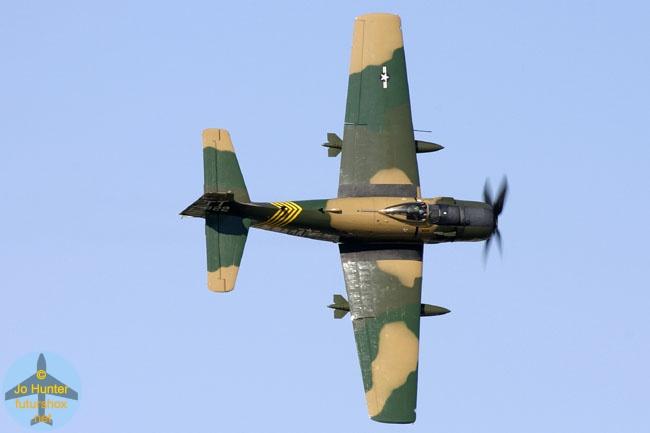 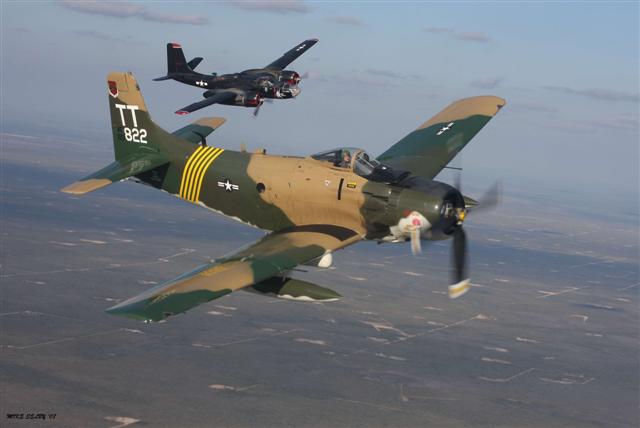 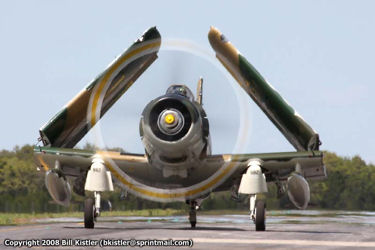 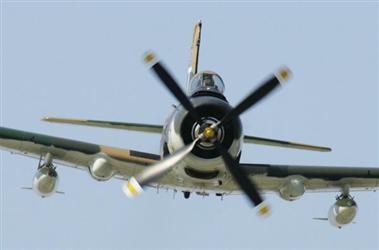 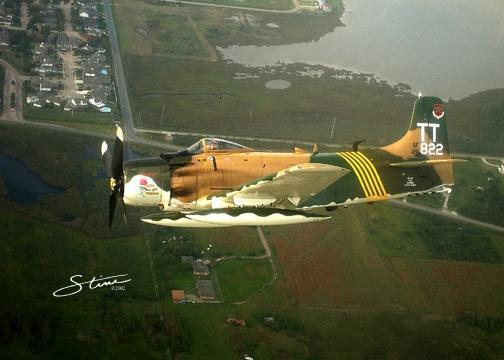